Now, after signing his National Letter of Intent with Bluefield State University, the right-handed ace will travel to Bluefield, West Virginia, where he will continue his baseball career.

“It feels good,” Eschenburg said. “It’s been a dream since I was little. I told my dad when I was four that I wanted to play college baseball and I stuck with it. The college process was a bit difficult, because I went to three different high schools, but we were close to the coach at Bluefield, and it just came down to playing time and where I could be most successful.

Eschenburg, who was also looking at Central Michigan University and Saginaw Valley State University, moved to Sandusky, Arizona, last year and has pitched with the Redskins for the past two seasons. .

“I loved this place,” he said. “I loved the atmosphere within the baseball team, especially this year. We were close and we were a family. Sandusky is much smaller than the school I attended in Arizona, and that made a big difference. I really loved this place. 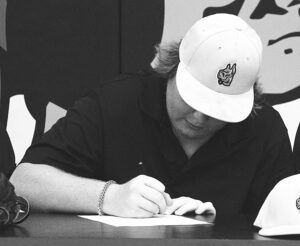 Robbie Eschenburg puts pen to paper as he signs to pursue his baseball career in West Virginia at Bluefield State University.

Last season, Eschenburg settled into the No. 2 pitching role, behind Joe Price.

Last spring though, Eschenburg thrived as the Redskins ace.

At plate, he led the team with a .465 batting average, collecting 40 hits, including 11 doubles, one triple, and 32 runs scored.

“It was awesome,” said Eschenburg, of his time at Sandusky. “Last year, myself and Joe (Price) fought for that top spot. We worked together, but we were both competitive and I think he got a little ahead of me. He decided that he wanted to graduate early so I knew it was my time to shine this year I really didn’t expect my typing to shine as much as this year because last year it wasn’t Wasn’t pretty, but I just went in there with confidence. When I went to the mound, I just believed I was the best, and I think I proved that.

After deciding at a young age that he wanted to play college baseball, Eschenburg started working towards his goal right away and received a lot of help along the way growing up in Arizona.

“I’ve been playing travel ball since I was eight years old,” he said. “My dad and I had relationships in Major League Baseball, growing up in Arizona. I basically grew up as a major league kid, I grew up in spring training facilities. I met Rickey Henderson when I was seven. I played for six different coaches who played in the major leagues, so I was truly blessed with my coaches and the people I met growing up.

Now that he has found his college home, Eschenburg is looking forward to upping his game, in preparation for the spring season.

“On the fall ball team, I’ll probably start on the second team, because I’m a freshman,” he said. “I hope I will improve. I don’t expect to come in and be the ace right away. Right now my fastball sits at around 87, 88 (miles per hour), but they said they could work with me, and they want me to hit 90 before the spring season starts. So hopefully by the time the spring season rolls around I’ll be third or fourth in the rotation.

His ultimate goal, however, is to make it to the big leagues, and he thinks Bluefield State head coach Drew Bailey, who has spent time in the Oakland Athletics system, can help him get there. to arrive.

“The big goal is to go all the way,” Eschenburg said. “I want to, and that’s the dream. I think the coach I have is the coach who can make it happen. He lived the experience; he knows what I have to do and the work I have to do.